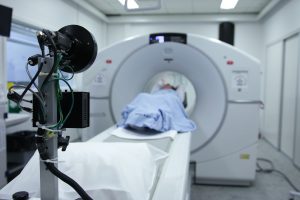 An article[1] in the Health Service Journal states that three patients died following failings within the radiology department at St George’s Hospital, London.

The article also states that eight patients came to severe harm due to those failings.

In March 2019 a review report of the radiology department on Serious Incidents in 2017 and 2018 found a series of problems with X-rays, CT scans and MRI scans. The concerns included delays in diagnosis, failure to interpret images correctly, missed diagnoses, and failure to act on adverse image results. Another issue identified problems with communications between hospital staff.

Remarkably, in an anonymous comment on the article, a person with relevant experience within the NHS said “When … we took over a neighbouring hospital, there were many such incidents of patients presenting with advanced cancer and a look back showed it was missed on earlier xrays/scans. Often an incidental finding on an X-ray taken for an unrelated issue, but that’s no excuse. Consultants responsible were angry when we declared [Serious Incidents]. It was both individuals and system failures … Yes patients died as a result.”

Some of the radiology errors led to identified harm for some patients. The hospital has now introduced changes that they say have reduced these errors. St George’s Hospital, as well as 77 other Trusts, including Barking, Havering & Redbridge University Hospitals NHS Trust, will share £200m in additional funding for new cancer screening machines[2].

At Sternberg Reed we are approached by a number of patients who have concerns about the care they receive. Our own experience, when talking to members of the public is that the same issues keep coming up, which leads to the conclusion that lessons are not always being learned.

Dr Darren Conway PhD is a Solicitor in our Medical Negligence Department here at Sternberg Reed, specialising in helping those who have suffered an avoidable injury in a medical setting.

If you want to find out more and see how Sternberg Reed could help you, click HERE

This article does not constitute legal advice and you should contact us directly if you are facing a similar situation.