Legal Aid Lawyer of the Year

The firm are very proud that Amardeep Pattni in our Family Department was shortlisted in this years LALY awards. It reflects the very high standard of work both by Amardeep and the whole department who work extremely hard to achieve amazing results for their clients time and time again.

which all helped Sternberg Reed and Amardeep Pattni stand out

In other categories LAPG report that the Belfast law firm representing families of the 21 Birmingham pub bombings victims and a solicitor who successfully challenged the Home Secretary over the detention of unaccompanied refugee children are among the finalists for this year’s Legal Aid Lawyer of the Year awards.

“It is such a privilege to be able to celebrate the ground breaking, life changing work of access to justice lawyers. The calibre of this year’s nominations was staggeringly high, and a real reflection of the expertise, grit and compassion which characterises the legal aid sector.”

The LALYS are run on a not-for-profit basis by LAPG and are now into their 15th year.

KRW Law was nominated as Legal aid firm/Not-for-profit organisation of the year by the Justice4the21 campaign.

Julie Hambleton whose sister was among the bombing victims, said:

‘This incredible law firm has provided the families still grieving the loss of their loved ones with the most professional and powerful legal representation. The whole team has been available to us 24 hours a day, every day. They investigate any new information as it becomes available, with a level of immediacy that would put many police forces to shame.’

Nottingham-based social welfare solicitor Stuart Luke was nominated by the British Refugee Council. His case of AA (Sudan) v Home Secretary led to a dramatic reduction in the number of age-disputed unaccompanied refugee children in detention. Another of his cases involved a dispute with a local authority over whether it should pay for a young care-leaver to be able to put flowers on her baby’s grave. Her baby had died after she fell down stairs in dangerous and poorly lit accommodation provided by the council.

Other finalists include Criminal Law Solicitors Association chair Zoe Gascoyne, a partner at Quinn-Melville in Liverpool (Criminal defence award); and Gareth Mitchell of Deighton Pierce Glynn (Social and Welfare award), whose successful high court challenge led to tens of thousands of council tenants in the London Borough of Southwark receiving refunds on their water rates, after the court agreed they had been overcharged for more than a decade.

The winners will be announced by Baroness Doreen Lawrence at a ceremony in central London on 5 July 2017. 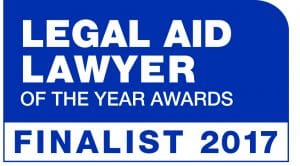